I am sure that everyone feels like a bad parent, and I do often ;) But I came across this reminder today and i liked it...

"To set our house in an order pleasing to the Lord, we need to do it His way. We are to employ His attributes of “righteousness, godliness, faith, love, patience, [and] meekness......Parents are to be living examples of “kindness, and pure knowledge, which … greatly enlarge the soul.” Each mother and father should lay aside selfish interests and avoid any thought of hypocrisy, physical force, or evil speaking. Parents soon learn that each child has an inborn yearning to be free. Each individual wants to make his or her own way. No one wants to be restrained, even by a well-intentioned parent. But all of us can cling to the Lord."

I thought that I better put Hadley's stats on here before I lose all the papers that they are written on!

I might get to updating the rest of our lives....
Posted by Schmidt Family at 7:38 PM 1 comment:

Christopher has a brother who is getting married in the fall. His fiance Ashley is just starting her photo classes in order to be a photo major. She wanted practice and what better way than to practice on Hadley!!! The pics turned out awesome!!! Oh..and those or my bows that I sell on etsy. Hadley looks good in bows ;) 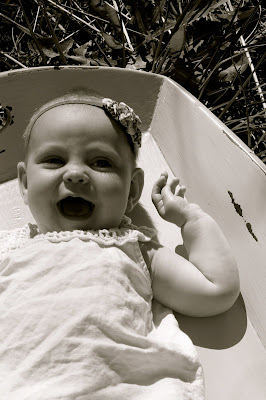 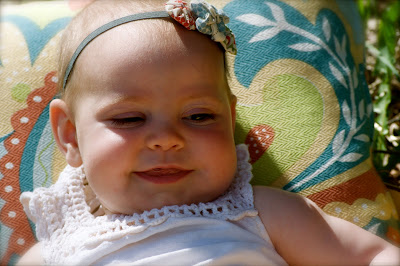 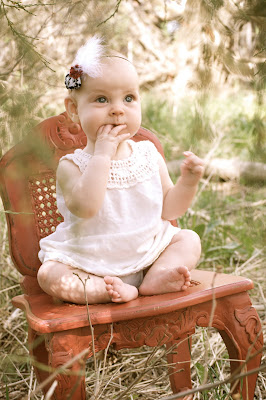 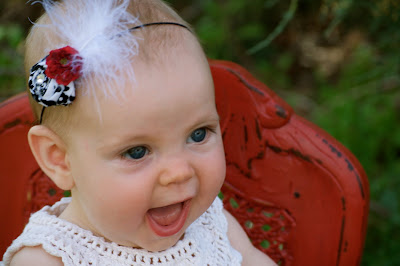 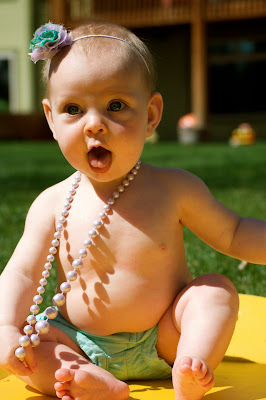 Has it really been four months since I posted? Has life passed that quickly? It seems to me that every time I turn around another month has passed and I have no clue where it went.

We around here have been doing the normal things... school, work, preschool, dr appointments, grocery shopping, everything that you do on a normal basis. You know, the boring stuff. I guess we have tried to throw in a few fun things too...

In February we went to boise. We saw the newest schmidt get blessed and had a ton of fun with cousins. I think Aiden would move away from us just to live with his cousins. Plus they have more boys in their house :0). Aiden also spent much of the month in Feb with strep throat.

April has sent us april showers and april snow and april wind... I am not sure if it has been warmer than 55 degrees all month. I have been working a bunch and we just seem to be wishing april away for warmer months. Oh, and Aiden got his tonsils and adenoids out. He is doing really well with it. I kind of feel bad for the kid with three surgeries in his life. The kid is a smarty pants though. He is reading really well and today read the word stroganoff. Who knows how to read that?!?!?

Hadley is growing like a weed too. She can sit up by herself for a bit now, she growls a ton and really never cries. At her six month check up she was 15 lbs and 10 ounces. Pretty good!

Oh--and here is some pics of the last couple of months... 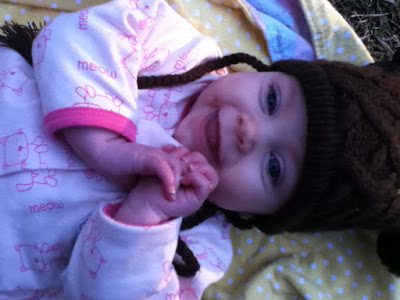 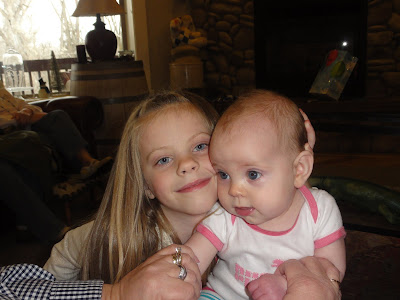 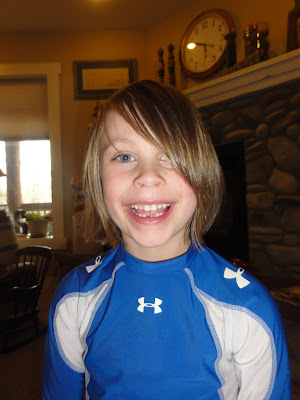 Christmas was a little different this year but a ton of fun. All of Christopher's brothers and their families came to his parents house. In total there were 16 people in the house including a two week old baby ( Baby Stella!) It was a ton of fun.
On Christmas morning I woke up early to get ready for work, yes I had to work but only for two hours, woke all the kids up and then opened presents. It was a whirlwind of opening! The kids loved it!!! I think my favorite was Aiden opening his Nintendo DS and being extremely excited! Hunter was so excited about what everyone else was getting that she forgot to open her presents. Hadley just chilled. 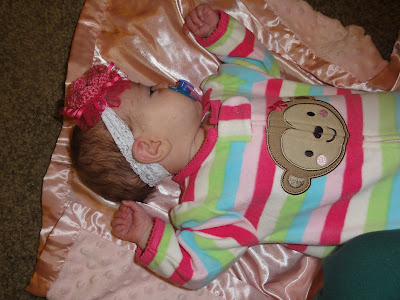 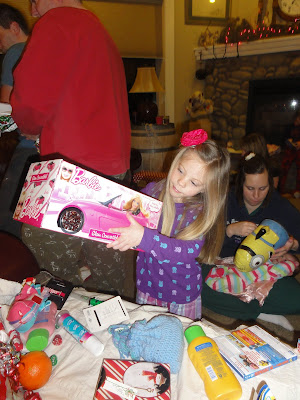 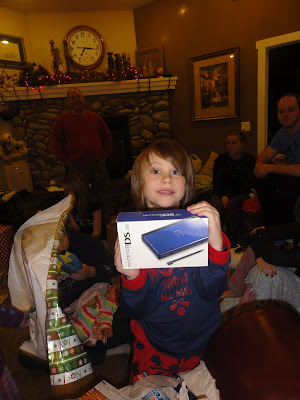 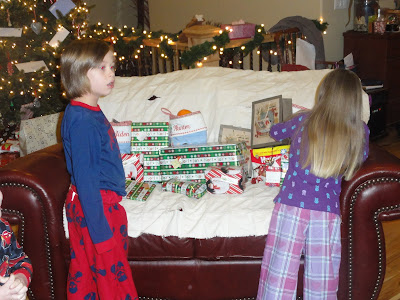 Life in the last month... 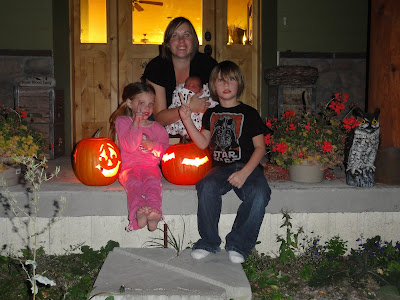 It seems that the last month has just flown by. I can not believe that Hadley has been around for a month!
Halloween was a weekend long event around here in east idaho. On Friday we went to a trick or treat street. The only problem with that is that everyone in idaho went to it. We waited in line to get in for one and a half hours only to wait in lines to get candy. Overall...it was a bit disappointing. We went to Aiden's school carnival that night and had a blast. We did bring the kids in to the Spook Alley. Aiden was so scared at one point that he jumped, got his foot caught on some fake spider webs and knocked down an entire spooky scene. It was hilarious. Needless to say, we left the spook alley after that! On Saturday we did some good old fashion trick or treating and enjoyed the night! Sunday was just a lazy day after that! 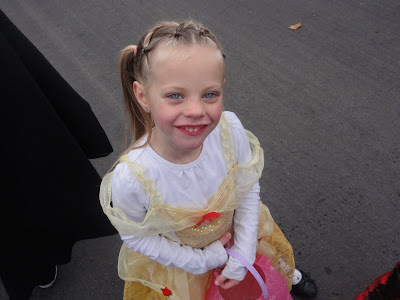 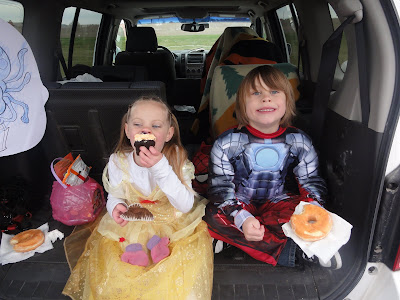 The hardest adjustment to Hadley is getting back on schedule. It is hard to get Aiden off to school and Hunter off to preschool in the mornings! We are so slow now!
Hadley is now a month old and growing like a weed. She is almost out of her newborn clothes and starting to smile. At her two week check she was 8 lbs 7 oz. I bet now she is over 9 lbs! She is a good sleeper at night as long as she is sleeping by someone. We are slowly working on that ;)
That is life for us now! Slow to get going but getting faster!
Four days old... 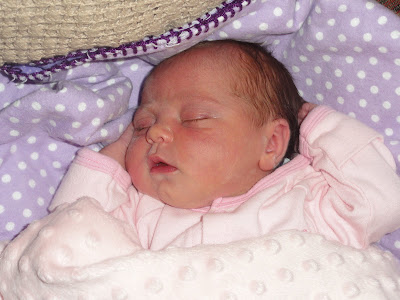 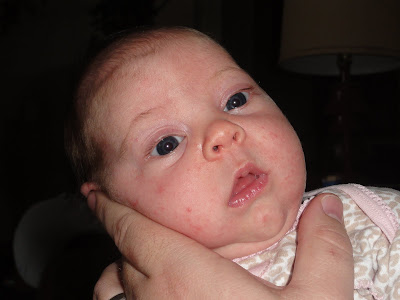 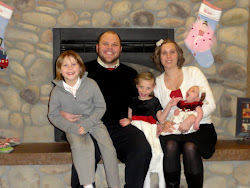 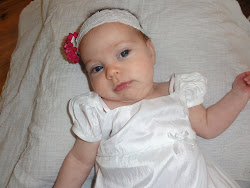 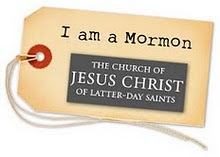